The Programmer, the Company, it’s Offer Letter and the Betrayal 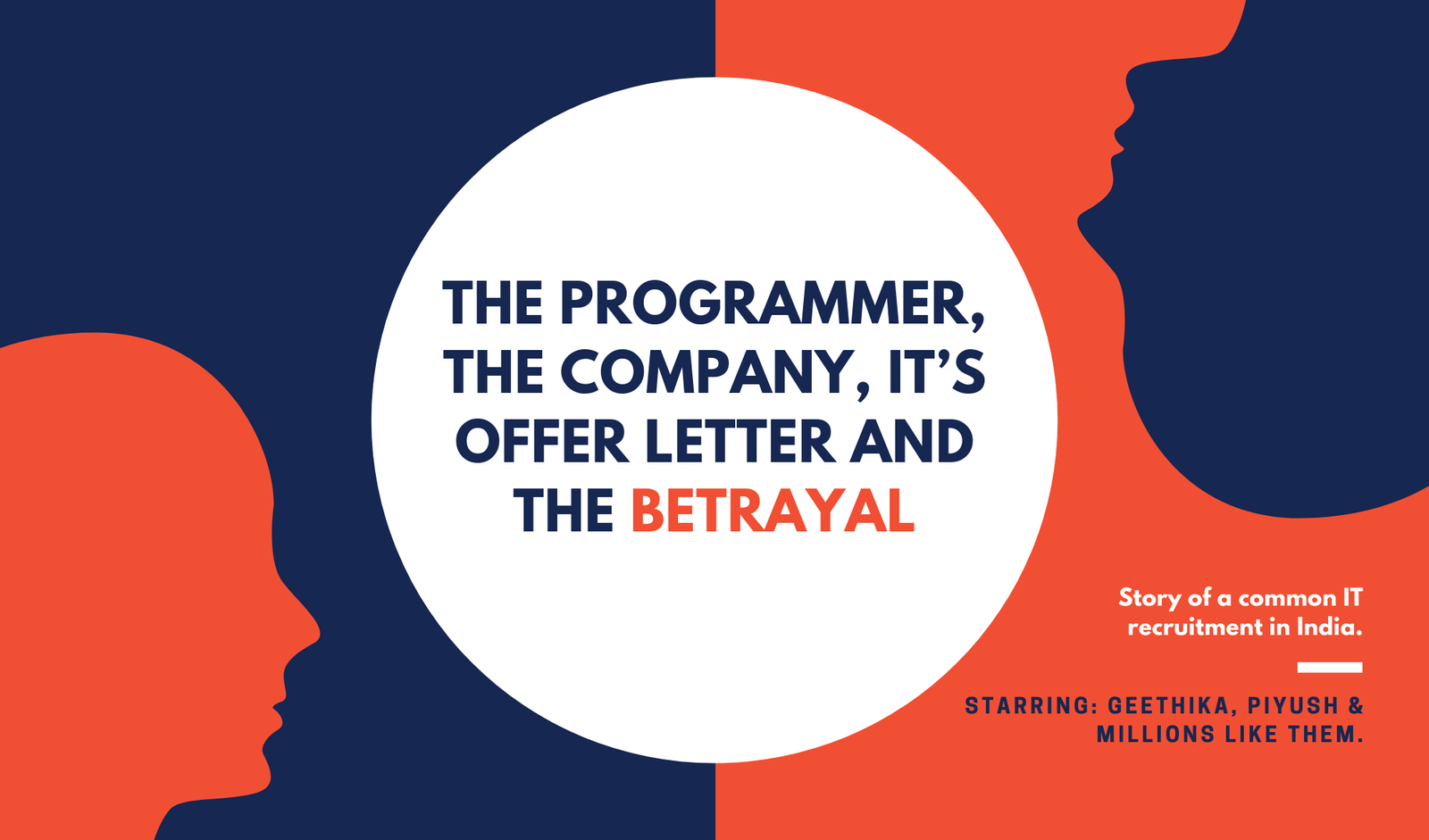 “5 offer letters have already gone out, we should be able to close the positions by the end of this week, we’re good!” Geethika, recruitment head at Bengaluru based IT services company, Prime tech, confirmed in the daily standup to the management. Rajnish heaved a sigh of relief. Those words were music to his ears. Rajnish is the CEO and co-founder at Prime tech. They recently signed a deal with a German healthcare company, it’s big. Project managers are working on the project scope with the client, it will take a few more weeks. Meanwhile, the recruitment team is busy ramping up the hirings.
But with 5 offer letters already shipped, things are looking good, Prime tech looks all set for a smooth ride this time around.

Fast forward one week, it’s Monday – daily standup; exactly 7 days back, in this standup Geethika had assured everyone. She has news to break in today’s standup as well – “Rajnish, only one candidate accepted out of 5.”
No one’s talking, but no ones’ looking surprised either.
Rajnish breaks the silence – “not again!”

Unless you’re not from the IT industry or have been living under the rock for the last 12-18 months, you are probably familiar with this story. As they say, it has become, “Ghar Ghar Ki Kahani”.

Piyush rawat is from Uttarakhand, he did his engineering from a tier 4 college in Pune. Piyush joined a Pune based small IT firm 3 years back as a fresher and has climbed up the ladder to become a senior Javascript developer there. Due to the pandemic he went back to his hometown in March 2021, and has been working from there since.

In the last 2 months, Piyush gave 7 interviews and got 7 offer letters. He has offers ranging from 7.5LPA to 11LPA. One of them was from Prime tech – 8LPA.
His current CTC? 4.5LPA.
Piyush has learned the trick. He has made “giving interviews” his favourite pass-time. It has really helped him feel confident in his skills. He has also learnt how to use these offer letters as bargain chips to get a better one. And it works, all the time. You cannot blame him. He’s just doing what is best for him.

There are no protagonists, no antagonists in the above two stories. They are just two sides of the same coin. If we try to judge general practices in the Indian IT industry against european or north american standards, we’ll get nausea. It is so diverse, so complex and has so many layers that judging it based on a couple of random samples will be erroneous and unfair.

IT recruitment space is currently like a gladiator combat arena. And Geethikas are the modern day “Recruitment Gladiators”.

It’s a complex problem and there’s no magic solution.

If someone comes and offers Piyush a package of 15LPA tomorrow, outbidding the previous highest “bidder” by 4LPA, what will Piyush do? Probably we all know the answer.
And can we blame Piyush for that? Probably not.

What if Prime tech, tomorrow, uses a blockchain HR technology to check a candidate’s all previous interview records before shortlisting him/her?
Interview records that captured all the details – how many companies he/she juggled with, how he/she bargained with them, everything.
Will that be unethical or unfair? Probably not.

The Game has just begun

This cat and mouse game, in some form, will probably continue for a while, though it will surely mature over time. But to make life a little less stressful, we might think of adding some “transparency-factor” to the mix. In a country like India this might be of varied degree, but something is better than nothing.
Here is a snapshot of average annual salary of an entry level developer by country (for Javascript, an in-demand technology)

Now, that’s the difference we are dealing with. IT being the most globalzed industry of all, it is expected for the IT wages to get closer to the global average faster than other industries. So nothing is happening in the vacuum. And this upward swing will be here till it reaches the plateau.

Looking beyond the horizon (or for the now?)

Instead of hoping, it is just another bubble that will burst soon, it’s probably high time we shift our focus to the conveyor belt, i.e the colleges and university campuses, and think how we can raise the quality bar there to meet the global standards. India is blessed with a humongous conveyor belt that other countries can only dream of.

All characters, names and events mentioned in this article are entirely fictitious. Any similarity to actual events, persons and businesses, living or dead, is purely coincidental.